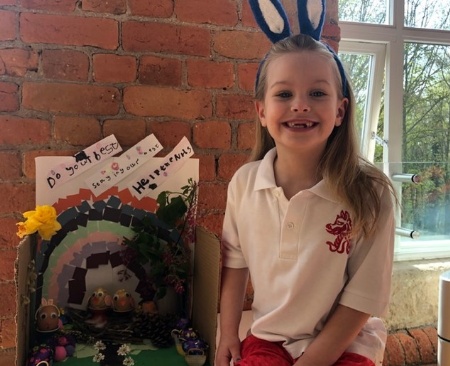 Beech Hall School pupil, Poppy Lukey, has been recognised for her outstanding creative talent in a prestigious, national art competition.

Poppy 5, was awarded the much-coveted EYFS second place prize for her masterpiece “Stay in Your Nest”, in the annual ISA (Independent Schools Association) Easter Egg competition.

Artistic Poppy, alongside other infant and junior pupils from the Tytherington-based school, were encouraged to decorate an egg and set the scene for their competition entry. The pupils completed the project as part of their ‘learning at home’, while the school remains closed in line with official government guidance to all but vulnerable and key workers’ children.

Headmaster, James Allen, commented: “It is always a pleasure to celebrate the achievements of our pupils. Poppy is an enthusiastic and hardworking young girl, and we are delighted that she has won this award with such a fitting piece during this time.

“Pupils across the school engaged in this competition with such positivity and imagination, from animals to superheroes, and even Little Red Riding Hood and Egg Sheeran! They are wonderful examples of our children’s remarkable creativity and artistic talent.”