Sometimes over the passages of time, history is forgotten and memories become faint.  We often wonder what the symbolism of things are and how they came to be?

Many pupils, staff and parents will walk past the Wall of Remembrance at Beech Hall on a daily basis, on their way to the Gym or Assembly Hall, and see the plaque commemorating the life of Munir Sawas 1986 - 2001, who attended the School as a day boy for the majority of his short life along with his two brothers, Ziad and Khalid, and sister, Ameira. 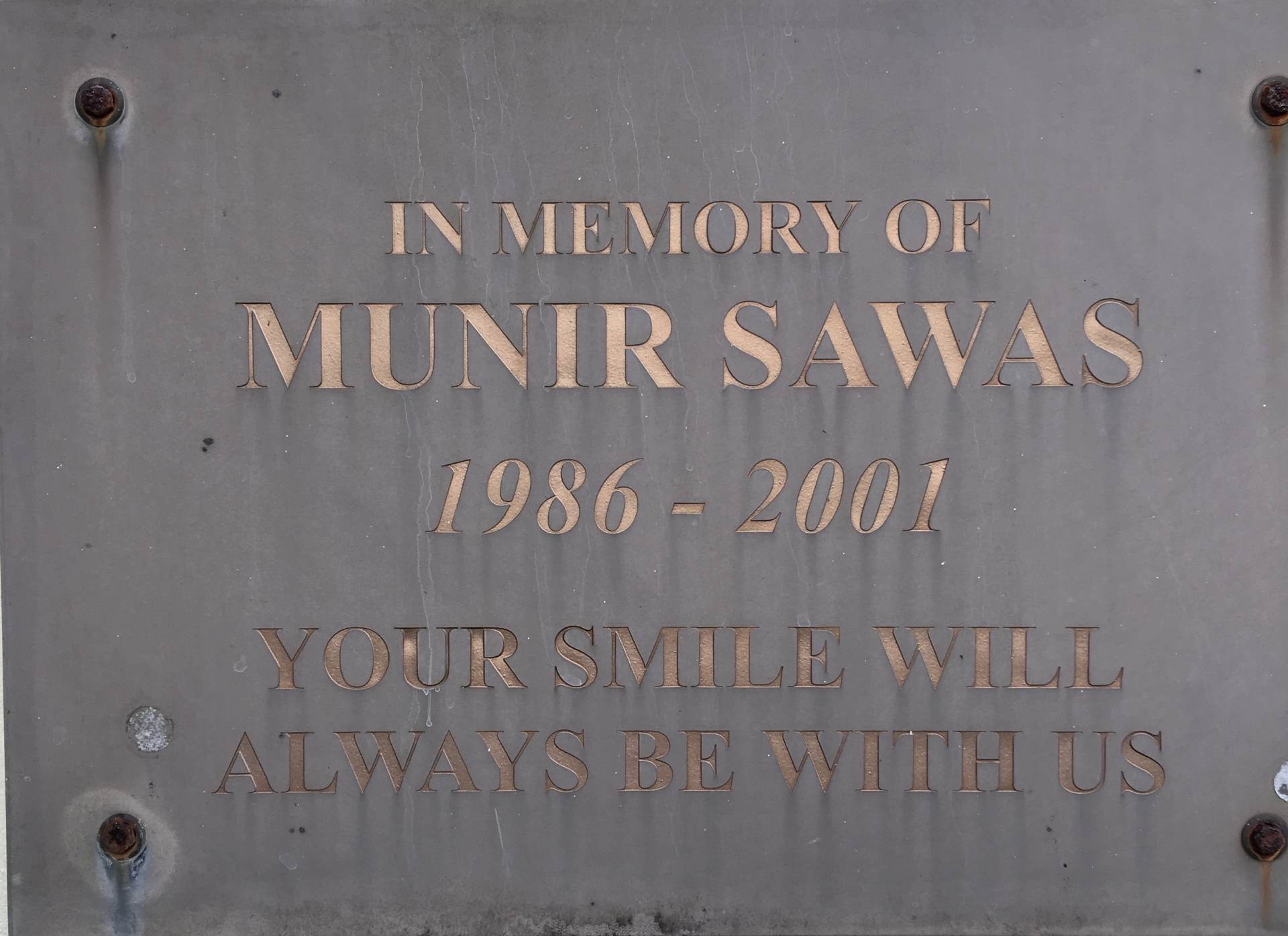 The plaque also says “Your smile will always be with us”.  Munir is fondly remembered by his family as having a zest for life and being an untiring ball of energy, as well as incredibly sensitive and caring, and always had a smile on his face. He was incredibly enthusiastic in everything he did and wanted to be involved in everything.  He was also extremely competitive and this shone through in his passion for sport, in particular swimming competitively for the Satellites, football and playing hockey for Cheshire and the North West of England, as well as Captaining the School team.  Although his mother, Pat, did say that Munir was an all or nothing type of person.  Either he excelled or he participated in a much less competitive way and maybe not taking things as seriously as he should!

Munir was also known for his love of performing arts whilst at Beech Hall and played the lead role in Bugsy Malone.  Mr Fitzgerald, Headmaster at the time, was probably a big influence on this as he regularly took School trips to the theatre and imparted his love of Shakespeare onto all his pupils.  Munir was also influential in the production of Beech Hall’s Stars In Their Eyes, after developing a dance routine on a School Ski Trip to the Back Street Boys, alongside his best School friend, Nick Gardner.  On their return to School this developed further and Wednesday afternoon activity sessions became rehearsals for the grand performance at the end of term.  Pat remembers this fondly and how everyone got involved and what fun they had.  This, no doubt, was probably the precursor to what we know as the House Plays at the end of the Michaelmas Term.  Pat also remembers the last performance during Munir’s time at Beech Hall as he had been off for 4 weeks having treatment and wasn’t strong enough to perform and they were given front row seats so that Munir could watch.  His friend, Nick Gardner, came onto stage to perform his song, which Munir had been working on with him originally to perform a duet. Nick, however, was unable to perform without Munir by his side and Munir was asked to join him on the stage, which he duly did.  Pat recounts that it was an incredibly moving and emotional moment and highlighted Beech Hall’s ethos as being all encompassing.

Munir also loved being in the School Choir up until leaving the School, alongside his friend, Nick, and Pat says that to this day, she can’t listen to the hymn “Shine Jesus Shine” (No 770) as it brings back too many memories.  He also developed a passion for French alongside his siblings, which was nurtured by Mrs Watson, and Munir’s sister took her French GCSE whilst at Beech Hall aged 12.

Pat recounts Beech Hall as being one big family and the School pushing individuals towards their strengths and interests, which gave everyone a personalised education.  The School was also all inclusive with everyone being given a chance to play sport competitively regardless of their ability and the significance of the match.  She also has memories of Leavers’ Trips to London following their Common Entrance exams, where the children were taken to Madame Tussaud’s, Wimbledon, the theatre, sightseeing and Speakers’ Corner at Hyde Park. Ski trips with Mrs Yandell. Hockey and Football trips abroad and also Mr Fitzgerald taking pupils on numerous trips to the theatre.  She remembers the School having a feel of Oliver Twist about it when they looked around, particularly the Dining Room, and that the children had a lot of homework to do which was sometimes difficult to fit in around the busy School Sports Fixture List.  Much of this ethos is carried through to the Beech Hall we know today.

Munir was always passionate about Beech Hall and Pat remembers how he ran a fundraiser for the School when it was threatened with closure in the 1990s.  Despite undergoing treatment for Leukaemia and having a Hickman line inserted, Munir continued to play hockey and got everyone to sponsor him for every goal he scored to go towards the School fund during the Season.

Following Munir’s death on 7 January 2001, the School were presented with the Sawas Trophy which is awarded annually to the individual who doesn’t necessarily excel in academia or sport so is unlikely to receive recognition for achievement in the traditional sense but despite this still gives their all in everything they do and immerses themselves into all aspects of school life. Last year’s recipient was Harry Lyons, for his introduction of chickens to the School, being a part of the School band - The Fifth, instigator of the Team 90490 bike ride from London to Macclesfield, which raised £13,000 for Park Lane School’s Hydrotherapy Pool Fund, and his general enthusiasm for life at Beech Hall School.

Thank you to Pat Sawas for taking the time to share her memories and photographs of Munir for this article and we will never forget his smile as his legacy lives on at Beech Hall.