The Virtual Sound of Music… 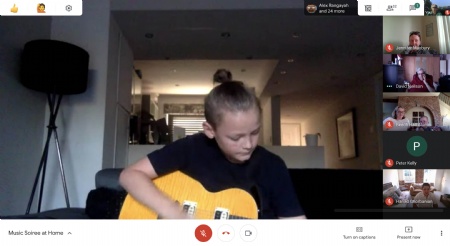 Households within the Beech Hall School community were recently awash with the sound of music, as the Tytherington-based school hosted its inaugural virtual Musical Soirée.

Traditionally held in the school’s grand entrance hall, fourteen confident performers prepared for the highly-anticipated production in their own homes, and as the relaxed host for the occasion Mrs Hayes settled on her sofa, the magical evening was ready to commence.

The talented young musicians including singers, guitarists and violinists virtually showcased their musical aptitude to a delighted audience. Around fifty people gathered, not just from the UK but from locations as far reaching as South Africa and Lithuania, for what resulted in a truly worldwide event.

Headmaster, James Allen, commented: “This year’s Musical Soirée was quite sublime; a spectacular and uplifting Beech Hall community event with passion and engagement, none less so than in the streaming comments flying up the right-hand-side of our screens, each one hollering mutual support and encouragement.”