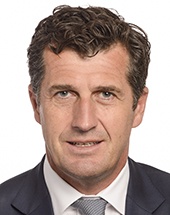 Robert Andrew Rowland (28 February 1966 – 23 January 2021) was a British politician who served as a Brexit Party Member of the European Parliament (MEP) for South East England from 2019 until the United Kingdom's exit from the EU in 2020.

Robert Andrew Rowland was born in Bowdon, near Altrincham. He was the middle child of John Rowland, who owned an engineering firm, and Mary, a nurse.

Robert attended Beech Hall in the 1970s before moving to Sedbergh School, Cumbria. He excelled at shooting, cross-country running, athletics, tennis, rugby, cricket and water polo. Nearly every day of his adult life he swam 50 lengths, no matter how short or long the pool. Perhaps he gained his enthusiasm of swimming during his days at Beech Hall?

Robert was married to Lisa Marie, and had three sons and one daughter.Rowland died on 23 January 2021 on holiday in the Bahamas. He was 54, and tragically drowned in a diving accident.